The Ahmednagar District lies in the central part of the state of Maharashtra which is having common boundaries with seven adjoining Districts. Ahmednagar is the biggest district of Maharashtra in terms of area and population. 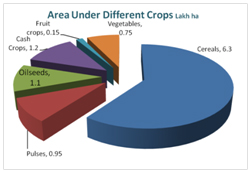 The climate of the district is hot and dry, on whole extremely genial and is characterized by a hot summer and general dryness during major part of the year except during south-west monsoon season. Ahmednagar district receives average 566 mm. rainfall. The major rainfall received during month of June to September. The average temperature ranges between 9 0c (during Dec.) to 41 0C (during April and May).

This zone is occupied the whole district except one block i.e. Akole, the remaining 13 blocks are under this zone. The average rainfall of this zone ranges from 400 to 600 mm. About 70-80 per cent of annual rainfall is received during monsoon period (June to September). Soil varies from reddish brown to dark gray and commonly grouped as light to medium black soil. In very few places deep black soil is also observed. Erratic nature of rainfall affects the moisture content in the soil, therefore, this zone is commonly known as drought prone area. Major crops grown in this zone are pearl millet, sorghum, safflower, bengal gram, wheat, sugarcane etc.

This zone is confined only to eastern part of Akole block. Geographically this zone has only 4% of the district area. The rainfall in this zone is 700 to 1250 mm annually which is well distributed. Soils are grayish black with varying texture and depth. The main crops grown in this region are pearl millet, green gram, benegal gram and wheat. Due to irrigation facility, farmers are growing. Vegetables like tomato, gourds and fruit crops like pomegranate, mango and Sugarcane.

This zone is situated in northwestern part of the district in western part of Akole block. Geographically this zone has only 4 per cent of the district area. The rainfall in this zone is very high which ranges from 1500 to 3000 mm. The land is mostly covered with forest and sometimes acidic in nature having poor fertility with low phosphorus and potash contents. About 50 percent of the geographical area of this zone is under forest. The crops taken in kharif season are paddy, ragi, groundnut, pulses and niger. The vegetables are also grown in paddy terraces on residual moisture.

On the basis of soil types and sources of irrigation, the district has been categorized into eight Agro Ecological Situations(AES) viz. assured and unassured irrigation system in command area with medium and light soil and the rainfed area with black cotton, medium as well as light soils. The existing farming systems being adopted by majority of farmers in rainfed area of district are characterizes by existence of food grain crops including mostly bajra, Jowar as cereals and mung, udid, and tur as pulse crops in combination with dairy and animal husbandry . The analysis of the farming systems in command areas indicates the dominance of sugarcane as a cash crop with dairy as an inseparable combination and it is being supplemented by either vegetables and food grain crops or horticultural crops.


Socio - Economic and Agriculture Situation in the District

The work area of KVK Ahmednagar falls within the jurisdiction of Mahatma Phule Krishi Vidyapeeth, Rahuri which as main research and extension campus at Rahuri catering to various technological research work on arid zone fruits, grapes, vegetables, aromatic and medicinal plants and its constituent research stations at Chas for dry land crop research, Savli Vihir for oilseeds and pulses crop research, Shrirampur for coordinated research on citrus within Ahmednagar District. Apart from this the Bhabha Atomic Research Centre, Mumbai has initiated an Onion Irradiation Project near Rahuri for extending support for irradiation project of onion on cooperative basis. The leading crops grown in Ahmednagar district are pearl millet, sugarcane, cotton, soybean, red gram in kharif and sorghum, wheat, bengalgram and onion in rabi season. The crops that occupy minor area but are an important source of livelihood security are maize, greengram, blackgram, groundnut The leading horticultural crops of the Ahmednagar District are mango, lime, pomegranate, guava and onion while banana, custardapple, ginger and turmeric crops are some prominent crops which have registered a phenomenal rise in area. 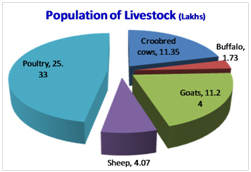 The Profile of Horticultural Crops in the Ahmednagar District is as follows:


The Profile of Livestock Situation in Ahmednagar District is as follows: